About Us We tell a different kind of technology story.

iSun is more than just a solar company. For over 50 years, we’ve built the things required to advance the adoption of new technology…and have done the hard work necessary to make innovation commonplace. Of all the innovations we’ve enabled, none have been as important as the transition from dirty to clean energy.

Our History A proud legacy of accelerating the adoption of technology.

For 50 years, iSun has enabled the important transitions of our world by accelerating the adoption of proven technological innovations that improve our lives. From the clean rooms that enabled silicone chip production, to the telecommunication installation services that connected industries and consumers to the internet, iSun has enabled the most important technological transformations of the last century. While these technologies and our capabilities have changed over the years, our commitment to accelerating the adoption of proven, world-changing technologies has remained steadfast. Today, iSun believes that clean renewable solar energy is the most important investment we can make. We are driven to use our capabilities to accelerate the transition from dirty to clean energy. 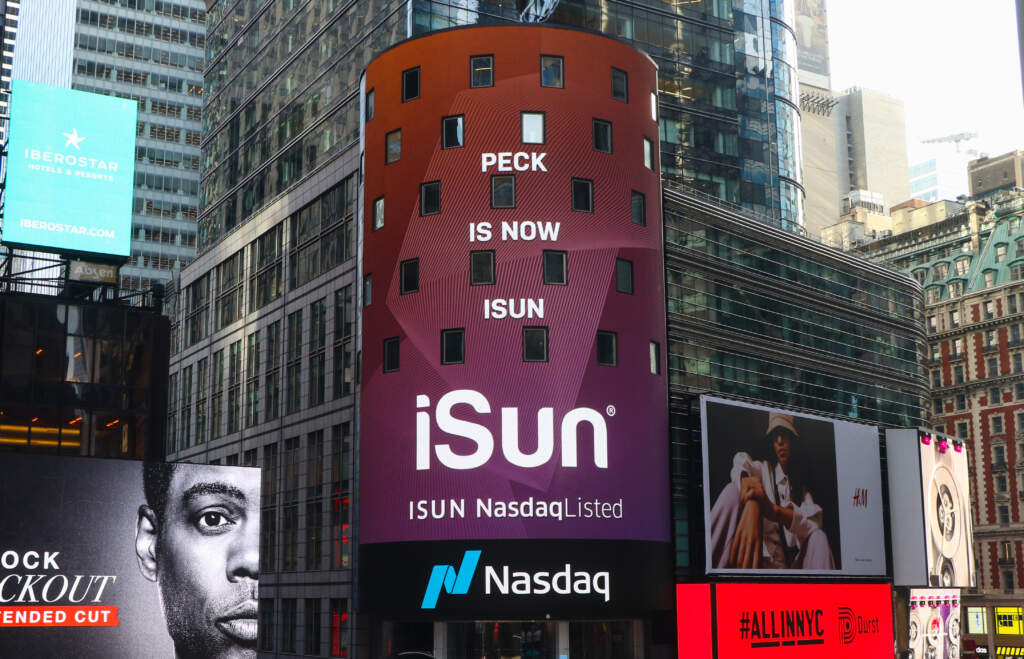 Our Story More than just a solar company.

One of our customers often jokes about the fact that we’ve been installing solar longer than the warranties that come with most solar arrays. Although they’re technically correct, our real story starts in 1972 – well before we became one of the largest, most trusted solar entities in the US – or even before we started helping communities adopt solar.

After 5 years of writing IBM a letter once a month asking for a chance to build one of their silicone chip production facilities, CEO and founder Harvey Peck’s efforts finally pay off. Peck Electric is given the opportunity to build its first clean room on IBM’s campus in a neighboring town, marking its foray into commercial and industrial contracting.

Having always felt that women should be afforded equitable opportunities in the trades as men, Harvey entrusts Diane Cone with the Presidency of Peck Electric.

As commercial computer networking becomes more commonplace, companies begin investing millions into computers and technology products. Because an improperly installed wiring system could bring down the entire network they’d just purchased for millions of dollars, companies quickly begin to realize that computers are only as fast as their weakest link. Demand for contractors capable of ensuring that these expensive machines perform as they should grows quickly. Because their experience installing technologically advanced projects such as IBM’s clean rooms perfectly complements such needs, Peck Electric becomes an indispensable partner to hospitals, technology companies and manufacturers…and Peck Data is born.

Having followed the industry for years, longtime Peck employee Kip Myrik begins to suspect that solar array construction – particularly those capable of generating enough power to power a factory or supplement a utility – might finally represent a viable business opportunity. He puts pen-to-paper, and discovers that large solar arrays would need to be built well, and built quickly in order to be commercially viable. This is a daunting proposition for most contractors, especially given the technological complexities associated with such projects. Then again…most contractors didn’t have experience with projects like IBM’s clean rooms, or state-of-the-art fighter jet simulators. Kip approaches CEO Jeff Peck with the idea. Later that year, the company’s first 30kW Solar Project is installed ahead of schedule… and Peck Solar is born.

To grow the reach and impact of is solar division, The Peck Company goes public (NASDAQ: Peck).

Peck expands its presence throughout the Northeast, installing over 200MW of solar installations.

Stay up-to-date with all things iSun. Register for our newsletter!